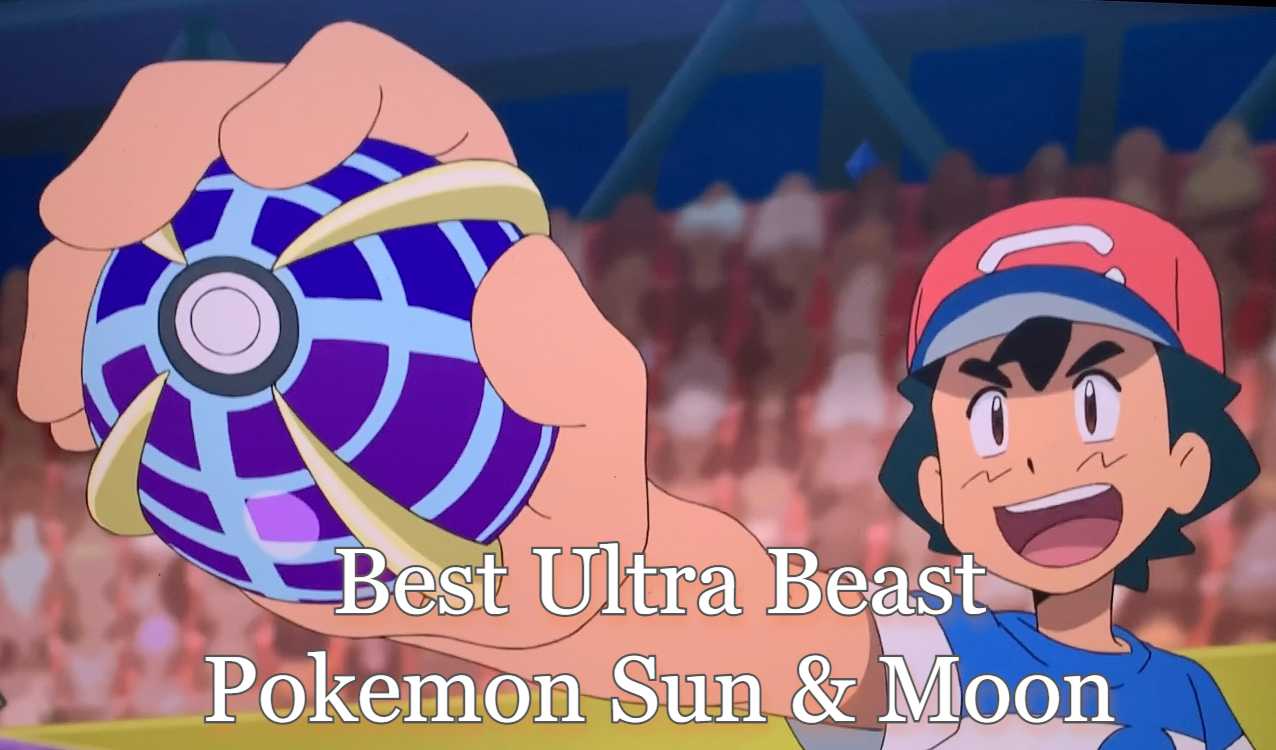 Through Ultra Wormholes, Ultra Beasts begin to appear in Pokémon Sun & Moon. Ash is tasked with becoming an Ultra Guardian along with his friends at the Pokémon School. Ultra Beast sightings must be dealt with by the Ultra Guardians. Ensure that they don’t increase their damage levels. Bring them home afterwards.

Ultra Beasts in the games are treated as legendaries. In anime, not all of them get to show off their strength and power. Some are definitely out for a fight, while others are just looking for a way to get home. This article looks at the Ultra Beast Pokemons.

Introducing Ultra Beasts in Pokémon Sun and Moon, these mysterious extra-dimensional creatures blur the distinction between Pokémon and monsters. Ultra Beasts are not considered legendary. This makes them eligible for some competitions. However, their numbers are small, they aren’t able to reproduce, and they aren’t nearly as strong.

Beast Boost is a feature possessed by all Ultra Beasts. Once they defeat an opponent, they gain a lot of stat points. In total, they have 570 stat points. However, they allocate them differently.

These are some of the strongest Ultra Beasts in Pokémon.

It looks like a tower made up of some smaller beings that are connected by leg joints. It’s possible to collapse the legs. This would allow the Pokemon to disguise themselves as stone towers or walls. Camouflage is one of the Pokémon’s most dangerous abilities. It also hates objects or objects that rest on it.

In this case, Stakataka ranks so low because it becomes docile when someone climbs on top and stays there when it tries to buck them off. Stankata has a strong rock and steel aesthetic. As a result, it can resist Rock, Dragon, and Fairy, while completely immune to Poison. Water is, however, a weakness.

As well as this, it is susceptible to Fighting and Ground. Regardless of his 211 Defense, Stakataka possesses a decent Special Defense and decent Attack. Sadly, it has a very low HP. It also has a low special attack. A worryingly low 13 Speed makes it slower than many evolutions at the bottom of the chain.

In “Rise and Shine, Starship”, Celesteela is introduced. Here, Sophocles accidentally stumbles upon it. Alola has had it around for almost a century. Arriving naturally through an Ultra Wormhole.

However, its roots are too deep into the ground to be caught by the Ultra Guardians. Once they find Celesteela, they quickly realize she’s preparing for flight. They take precautions to prevent the blastoff from damaging anyone or anything nearby. The anime does not feature Celesteela fighting. However, when she takes off, Team Rocket is quickly blown away.

Blacephalon will drain the life force from the prey while it is distracted. Then it will grow a new head. This is definitely a scary creature. The prey can negate Blacephalon’s primary attack if they keep their distance and focus.

Fire/Ghost is an interesting typing for Blasephalon. As a result, the character is completely immune to Normal and Fighting, while being resistant to Poison, Ice, and Fairy. It is also susceptible to Dark, Ground, and Water. There are great Special Attack stats as well as good Attacks and Speed. On the other hand, it has very low HP and Defense. On top of that, it has terrible Special Defenses.

The Pokemon Pheremosa has an odd appearance. An insect or white cockroach impersonating a lithe woman might be the closest comparison. Pheremosa can run at incredible speeds thanks to its thin body and incredibly long legs. Pheremosa is also capable of emitting a pheromone that makes anyone exposed to it stare in wonder at it.

The Pokemon world thoroughly disgusts this insect-like Pokémon. It is extremely claustrophobic. Additionally, her high speed and pheromone abilities make her dangerous. An attack using Muks or another garbage Pokémon could probably exploit this odd personality trait.

Pheremosa is a dual-class Bug/Fighter. Therefore, it is good against Fighting types, Grass types, and Dark types. However, it has a lot of trouble with flying types. Statistically, it is a very fast pokemon. It has a fast attack, special attack, and great speed. Sadly, it has a low hit point. Special Defense and Defense are also lacking.

There are two distinguishing qualities among Naganadel’s UBs. The first is that he belongs to an evolutionary tree. His stat total at base is 540. Nevertheless, he is clearly a sweeper. His special attacks and speed are his greatest strengths.

The offensive performance of Poison and Dragon is disappointing. Consequently, your STABs are not as useful as they could be. Though they’re decent defensively, they’re not very good against Ice and Ground. Generally, Naganadel has no weaknesses. They have no four-fold weaknesses either.

Additionally, the poison’s fluid is incredibly sticky. It will poison the weak soul soon after attaching to it. Having trouble getting rid of the poison will be difficult. This is the reason it’s not ranked higher since it has the capability to communicate telepathically and should be able to reason with humans.

Naganadel in-game is both poisonous and dragonlike. The Resistance for Fighting, Poison, Water, and Electric is interesting. In contrast, it is vulnerable to Ground, Psychic, Ice, and Dragon. There is a minor improvement in stats over Poipole, with its Special Attack and Speed being better. The remaining stats, however, remain under par.

In comparison to other Ultra Beasts, Poipole is small. Still, it poses a threat. Its head is covered in spikes. The spikes can release a poisonous substance like Naganadel, which is highly adherent.

When it venoms its enemies, it laughs madly while coating them in venom. Thus, poisoning them is a delight to it. It can speak to humans as well. You would probably have to be like a madman to talk to him.

This type of Pokemon is extremely powerful against Fighting, Grass, and Fairy types because it is pure poison. Psychics and Ground are its only weaknesses. Despite being well rounded, its stats are on the lower side due to being low on the evolution chain.

Buzzwoles have four spindly legs and resemble insects. Their arms are swollen and have a spine-like shape. They are extremely powerful. This is capable of disintegrating a dump truck with a single punch.

The proboscis can also be used as a weapon, which makes it even more frightening. This allows them to drain the energy they are giving them, which further enlarges the muscles of the creature. There is no telling if Buzzwole’s power has a limit. He feeds on living beings after all. Which is quite alarming considering its already high base strength.

Bugwole is a Bug/Fighting type, which means it can deal with Fighting, Grass, and Dark. Flying types, however, present its greatest challenge. Though it is described in the lore as having unlimited strength, this isn’t reflected in the game. Both Attacks and Defenses are above average. The Special Attack and Defense are horrendous. Additionally, it has a slow speed.

As well as a sweeper, Nihelgo also offers a tank. With highly impressive speeds and special attacks. That will probably not deter you from battling her. As long as you stay within range. She makes up for her poor defense with her good HP score.

The combination of rock and poison offers a variety of advantages and disadvantages. Its biggest weakness is to Ground. The best Rock attacks are physical, too, despite Rock’s exceptional offensive abilities. Restricting Nihilego’s use of his special abilities.

It can take over other Pokemon, which makes it one of the most dangerous Ultra Beast. Consider what might happen if a Nihilego managed to infest, for example, a Buzzwole.

It could also be another powerful humanoid Pokémon. However, neither the games nor the anime explore this possibility. However, it is a frightening possibility.

Fairies, Normals, Fire, and Bugs are types that Nihilego is effective against in-game. When it comes to fighting fairies, Nihelego is terrible. According to Nihigilego’s statistics, he is not particularly impressive. He has low Attack and Defense. However, his Special Attack and Special Defense are decent.

A Zurkitree is an exceptionally large Pokemon made of wire and sparks that looks like a stick figure. Zurkitree can deliver shocks that are comparable to earthquakes. To boost its power, the creature can access power plants and other energy sources.

Although the Zurkitree is capable of dealing impressive damage, it does require recharge. In low-energy situations, it absorbs electrical currents from the ground and plugs itself into it. Attackers are at an advantage in this weakened state. Provided they survived the prior massive discharge.

Unlike Flying, Steel, and many other types of monsters, Zurkitree is pure Electric. This makes it vulnerable to the type Ground monsters. The high stats of Zurkitree help him excel at one single thing: Special Attacks. The rest of his stats are rather average.

The sword-like arms of the beast were reported to be able to cleave a giant steel tower in half with a single stroke. This does not rank higher since water and fire are its main weaknesses.

Grass and Steel give Kartana an interesting resistance to Normal, Rock, Psychic, Dragon, and Fairy. But Kartana is weak to Fighting and immune to Poison. In addition, it is really susceptible to Fire. With high Attack, speed, and defense, it’s really a glass cannon stat-wise. The downsides are that it’s unimpressive in terms of Special Attack.

Among the Ultra Beasts, Guzzlord is large and heavy. It is said the round dark dragon Pokemon exhibits an insatiable appetite. During its lifetime, the Pokemon will eat anything and everything that comes its way.

This Pokemon is able to consume entire buildings due to its voracious appetite and size. That makes it a very dangerous creature. Also according to its stats, it moves extremely slowly.

Gamewise, Guzzlord belongs to the Dark/Dragon type. Grass, Electric, and Ghost are good matches for it. Psychic is completely ineffective against it. Fighting, Dragon, and Fairy are its main weaknesses. Its incredibly high HP stat somewhat compensates for this. However, its entire set of stats is poor, especially the Speed stat. Its stats, overall, seem to be in line with the lore to a certain extent.

How to Catch the Ultra Beasts

UBs can be caught on Ultra Sun and Ultra Moon. Ultra Wormholes are the best places to catch them. The Necrozma encounter allows you to unlock this. Once a champion, you can unlock a few more in Poni Grove. After becoming a champion you can complete various missions that make it your mission to catch the Beasts. However, not all are available.

The Ultra Beasts are an interesting bunch, a lot of whom are either loved or hated by fans because of their powerful yet legal powers.