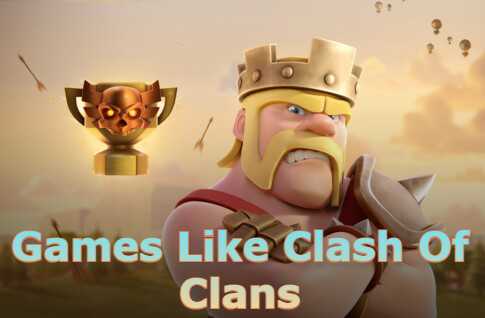 This game, which combines combat and strategy, is extremely addictive. The game was developed by Supercell. Coc is one of the most popular on iPhones and iPads.

Among the missions available in CoC are single-player campaigns as well as multiplayer adventures. In most cases, you gather resources to build better buildings and create stronger soldiers. You can send warriors into enemy territory via the combat system. Canons and walls can be used to defend your own territory. Fighting with other players is also an option. You can also rally your clan to fight each other.

Consider trying new games instead of searching for Clash of Clans mods and hacks . Here are some Games Like Clash Of Clans that you might enjoy.

List of Games Similar to Clash of Clans (Strategy) 2021:-

Playing Clash of Clans can be frustrating if you have to wait a while for things to happen. So how do you pass the time? Consider instead playing another one of those addictive games like Clash of Clash to keep it going. Here, we have listed every game we could find similar to Clash of Clans.

Playing Castle Clash is free of charge. It is one of the most popular mobile games in the United States. The game consistently receives positive reviews from its users. There are many discussions on the Internet about Castle Clash vs CoC. However, it shares striking similarities with Supercell’s CoC. The game, however, is more than just a copycat. Over 30 million players worldwide have been attracted to it because it has a distinctive appeal.

You take on the role of a Warlord in Castle Clash, building the world’s most powerful empire. Mythical creatures are at your disposal to help you with your battles. You can hire powerful creatures as well as smaller creatures which are deadly. The Arena allows you to compete against other players as you upgrade your fortress and troops.

Although Castle Siege isn’t quite as good as the old Age of Empires games. Nonetheless, it is an excellent alternative to Clash of Clans. The graphics almost resemble Age of Empires 2’s style. Your base can also look quite impressive and majestic. On the battlefield, you are also able to control your units, unlike Clash of Clans. While keeping the intuitive control schemes of point-and-click, this is becoming more about tactics.

Like an action movie that became a combat strategy game, Jungle Heat is like living in a jungle. People will be carrying huge guns. Bases will be ready for defense. Controlling the tropics will be your mission. This region possesses immense natural resources such as oil and gold. However, you will run into marauders who will not just let you conquer the jungle. There is nothing complicated about the battles in this game, but they are highly entertaining. The bases you build are powerful.

You must protect it from your enemies. The firepower of your troops can be increased by updating them. In addition, you can play multiple heroes with different abilities. Jungle Heat is a great cross-platform game as well. It means you can pick up the game on any device or social network and continue playing where you left off.

During the game’s battles, you’ll feel as if you’re in an action movie. Additionally, the fact that you can play it on multiple platforms makes it that much more appealing.

There’s no doubt that Call of Duty continues to rank among the most popular shooters despite some fierce competitors. Call of Duty: Heroes stands to become one of the most popular base-building games as well. Although this freemium title looks like Clash of Clans, it’s not just a straight copy. To set itself apart from the competition, it offers some interesting features.

One of the most impressive features is the ability to call in characters from the Call of Duty series. John ‘Soap’ McTavish and Captain Price are among them. Each is capable of turning the tides of battle if he uses his skills correctly. We also appreciate the fact that the game gives you perks for logging in every day, including premium currency.

There is a relatively low level of popularity for Viking Wars. Nevertheless, its compelling gameplay will draw more players. It involves building your own Viking troop, as the title suggests. You must defend your town from invading tribes. By upgrading your watch towers and cannons, you can strengthen your base. To fend off the enemy, you create defensive strategies. You can storm the territory of your enemies and launch a terrifying attack without them retaliating. The action occurs instantly. Plus, you can view replays of your previous attacks whenever you like to help you plan your next one.

The graphics in Viking Wars are outstanding, and they are definitely better than those of similar games of the same genre. Several users have stated that Viking Wars was better than Civilization VI. You can read their reviews on the Play Store. Their comments illustrate how great Viking Wars is.

The Total War Battles: Kingdom is a great alternative to Clash of Clans if you’re looking for another intense game. War and battles are part of it. The most important thing is to build a kingdom. Developing its infrastructure and building the kingdom will be your responsibility. Furthermore, it’ll make you feel like a god by letting you terraform anywhere you like.

Contrary to popular belief, the conflict is more about the clans than the clash. However, there are so many things you can do within it that you will soon forget. As you progress, you’ll unlock a variety of units to command and battle. In contrast to other games in this genre, it feels more like your army is evolving and being built from scratch.

It’s kind of like Sid Meier’s Civilization on mobile. In fact, it’s Brian Reynolds’s design from Civilization 2. This is an interactive timeline of historical epochs. Building your building is evolving as you progress, providing you with more advanced technologies. A large screen is best for this one since it is absolutely gorgeous to look at. You can also raid like you would normally do in Clash of Clans.

Is your unit getting tired of training? Don’t bother. With Clash of Lords 2, you don’t need to train at all. Starting right away, you will be engaging in thrilling battles. With five modes to choose from, you cannot go back. There is never a dull moment with these games. For even more excitement, you can create a guild with your friends and play multiple heroes. Among the many games like Clash of Clans available, this is one of the most popular. Don’t miss out on this action-packed game.

Because Guardian Kingdoms is about fighting together, the days of combating each other asynchronously are gone. During any battle, you can call upon your allies for support. Allies can often make the difference between winning and losing. This can lead to simple quarrels becoming these raging warzones.

Usually, it is a one-sided argument, but sometimes it is a two-sided conflict. With its ease of use and accessibility, Guardian Kingdoms maintains the core Clash of Clans formula. The game also harkens back to Age of Empires with its large armies and epic battles.

Boom Beach is made by the same developers as CoC. Consequently, this means another exciting strategy game with countless hours of gameplay ahead. The fact that this game from Supercell has hundreds of positive reviews proves its popularity.

A tropical archipelago serves as the setting for the game. Defend and invade the beautiful islands as you lead your troops. There are ancient powers on these islands. You must fight against the evil Blackguards. This is a unique experience on each island. Gather treasure from other players’ bases. Take down boss enemies and raid their bases.

There’s an imitation Clash of Clans game based on pirate life. There is gold and grog in it. You still have all that familiar gameplay. There are also parrots and eyepatch items. Nevertheless, there are certain elements that make Plunder Pirates unique. Among them are exploring uncharted islands, finding new lands, and finding new ships. Not to mention mapping out new ships, monsters, and landmarks.

The graphics alone are worth playing Dawn of Titans. It’s a visually impressive game when compared to the rest on our list. It becomes even more thrilling when you zoom back and forth between your floating kingdoms to view the titular Titans. Additionally, it has some rather awesome controls, so you should play it.

Your troops can be instructed with a greater degree of precision. In addition, there is a comprehensive single-player campaign. This means it differs from the other titles on this list in that it’s not just focused on battle and building.

These were some of the best Games Like Clash Of Clans. You can choose one according to your taste. Or you can try each of them to find some for you.