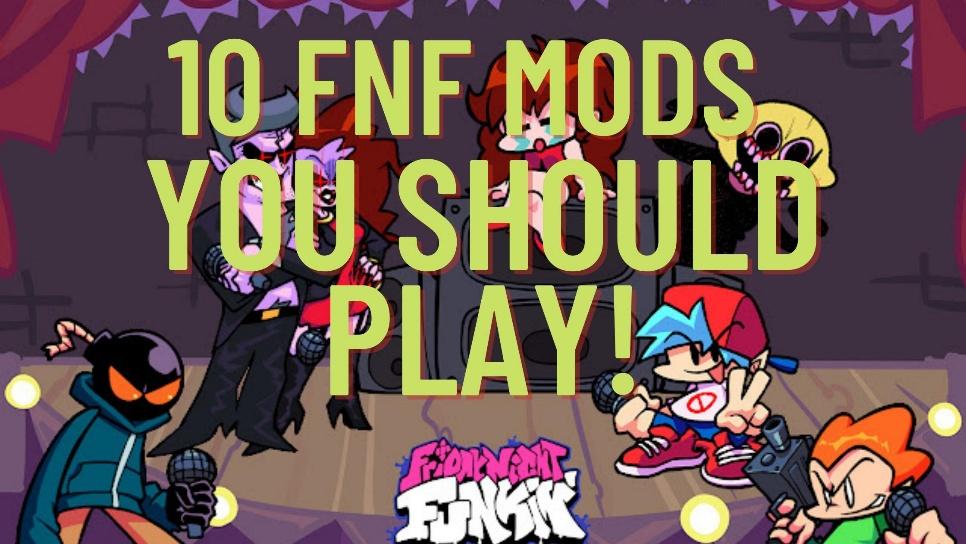 Are you an FNF lover and looking for some of the Best Friday Night Funkin mods to play? If yes, then this list is for you!

The gaming world has changed a lot over the years. From 1990s to 2000s and 2010s, better and better games came out and replaced the old games. FNF is one of the games that has replaced many other games. But there is a small problem…

Many players get bored playing the same Friday Night Funkin’ over and over again. So For a change, in this blog we have gathered the top 10 FNF mods that you should play! These mods are addictive and enjoyable.

So, You should give these mods a try!

Vs. Cheeky mod is very similar to the original FNF, it also has music playing and the use of the arrow key. The point that makes Vs. Cheeky different is you have to complete some tasks to win the game. You must finish these tasks before your opponent does.

This mod was created by a Modder named TheWizKid922. He has also created mods for many other popular games. You should play this FNF mod!

The next FNF mod that you should play is Vs. Mr Bean mod. It is one of the most popular mods because of the actor/comedian Mr. Bean. This mod is also very similar to the other mods mentioned, but there are some new songs. Mr Bean rap battles a blue haired kid.

Tabi, Hex, pump and Whitty are also featured in the background of the main characters.

In this mod, you have to win against Whitty. The first fight is called the Lo-fight and then few more. Whitty is an amazing character with fire songs. The last track is called Ballistic and It is Ballistic! Whitty is also an ex-rockstar and short tempered. The game is same, you have to play with the arrow keys.

It is one of the hardest mods. KadeDev is the programmer of this mod and the cool animation is by Nate anim8.

FNF Miku Mod is different than the other mods mentioned, because it is specially designed for music lovers. It has 6 bonus songs and some original songs as well.

You can play as a Japanese character Hatsune Miku. Other things are pretty much same. You get three modes: Solo, Battle and Practice.

This mode is also similar to the original Friday Night Funkin’ game. You have to complete different tasks using the arrow key and these tasks must be cleared before your enemy does.

Some ‘EM Out Struggle is one of the most played mods. It was created by Taeyai. In this mod, you have to play against Gracello. Gracello is a character that always keeps a cigarette and due to his bad habits, he is weak. You will also listen to songs like Dip and Release. All of the other stuff is pretty much the same, you will play with arrow keys and try to win against Gracello.

In the Hex Mod, you will play against Hex a robot with monitor as his head. Hex Mod is created by YingYang48. Songs like Dunk, Encore, Hello World and RAM make this mod one of the best. Hex faces a technical problem at the end, as hex is a robot a virus infects his system in the last song.

The next mod that you should play is Vs. A.G.O.T.I mod. It stands for A ON THE INTERNET. So the back story to this mod is that Boyfriend and Girlfriend somehow came across this mysterious world. The only way to escape this world is to play against the mysterious singer.
Vs. A.G.O.T.I is the first mod to have a modified menu. The music is beyond expectations. The 2nd last is my personal favourite.

The next playable FNF mod is Vs. Sky. The story goes with the new character Sky. She wants to date boyfriend, but he refuses because he is already dating Girlfriend. Sky gets angry and teleports Boyfriend and Girlfriend to Manifest. Now, you have to play against Sky and win otherwise you will get stuck with her forever.

Manifest, Sky and Wife forever are the new songs in this mod. You should play this FNF mod!

FNF: NEO is last on the list but not the least, it is a popular mod and considered as one of the best mod in the mod community. You have to play the game and convince your girlfriend’s dad by a rap battle.

The songs in this mod are remix version of the original songs. This mod is in the futuristic location with amazing setup and characters. The game is same, you have to play with an arrow. It becomes difficult at the end.

You should play this FNF mod.

These are some of the frequently asked questions about Friday Night Funkin’.

What was the first FNF mod?

What is the most played FNF mod?

Friday Night Funkin’: Neo is the most played FNF mod. Many players love this mode and It is understandable because it is incredibly addictive and enjoyable!

Yes, FNF mods are free to download and play. It is recommended that you should only download the mods that are created by the FNF original mod creators.

This blog is made for players who often get bored playing the same Friday Night Funkin’. In this blog, we have gathered top 10 FNF mods that you should play! All of them are mentioned above, you should give them a try!

Lastly, I hope this blog helped you to find new FNF mods, let us know which FNF mod is your favourite!