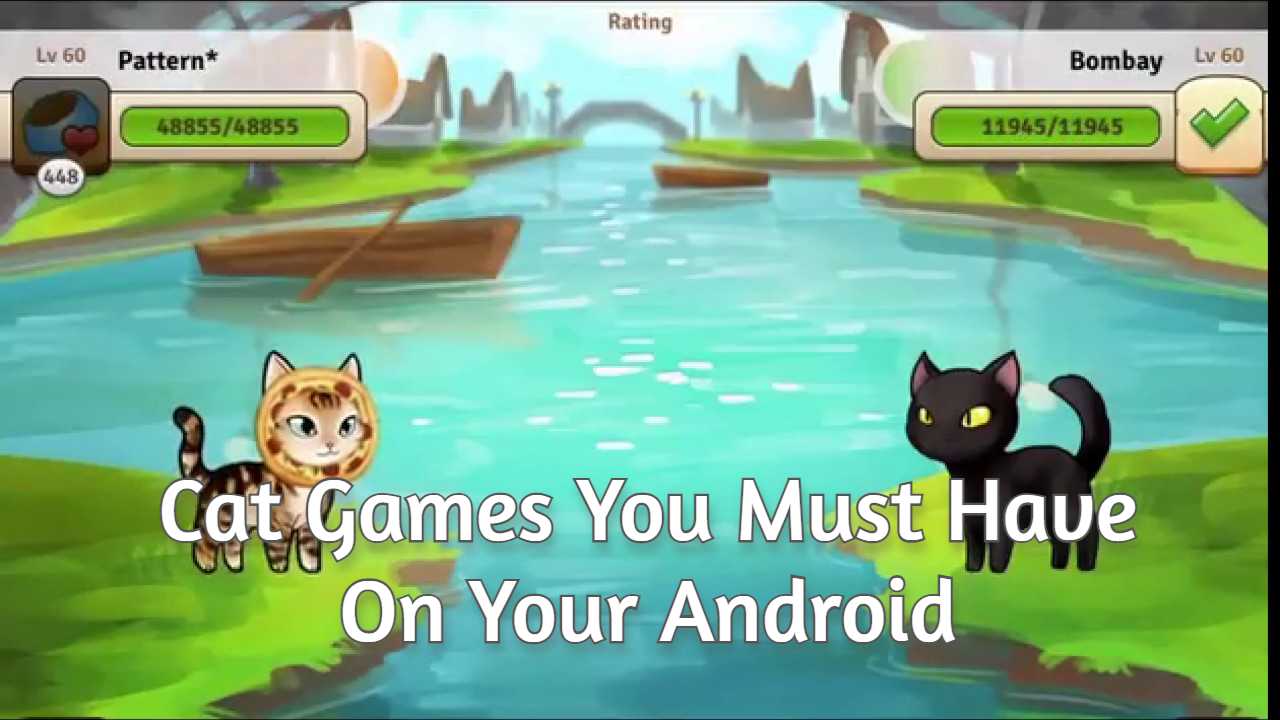 Bread Kittens takes you to the faraway and magical world of Catlandia, where the evil ChowCorp is turning things upside down with a nefarious scheme, brainwashing kittens and depriving them of their free will. The objective in Bread Kittens is to save as many kittens as you can by defeating them in action-packed one-on-one battles and then “breading” them – i.e. bringing the brainwashed little ones back to normal and adding them to your ever-growing team. “Breading” and unlocking new bread recipes are important aspects of Bread Kittens, as the delicacies you bake boost the battle prowess of your kittens, and make no mistake that you’ll need to stack up as many special abilities as you can to overcome a series of powerful foes and big cat bosses. Bread Kittens has wonderful HD graphics, easy-to-master controls, and poses just enough of a challenge to make the game enjoyable for all ages. Collect unique kittens, find new bread recipes, name the kittens you recruit, train your team, and restore peace and harmony in Catlandia by putting an end to the reign of ChowCorp!

Why the grump? The unmistakable, world-loathing face of Grumpy Cat has been etched into the minds of all human beings who have ever surfed on the Interwebs – and deservedly so, because the sheer grumpiness emanating from this tiny creature’s trademark frown can be used in a myriad of ways to express our disdain towards basically anything. To nobody’s surprise, Grumpy Cat’s Android game denotes itself as the worst game ever, which is as far from the truth as Grumpy Cat is from smiling. Grumpy Cat’s Worst Game Ever consists of an endless loop of unbearably terrible mini-games – for instance catching that irritating red dot, catching birds while falling down from the heavens at warp speed, and removing cactus needles from Grumpy’s fur -, and the loop goes on until you lose all three of your lives. The further you get, the faster the games are, and the more challenges you complete, the more Grumpy Cat-variations you’ll unlock, which will come paw-in-paw with new mini games and the dreadful opportunity to use your collection of Grumpy Cats as stickers in iMessage.

Much like Grumpy Cat, Nyan Cat is a first-class feline meme superstar, although – as far as we know -she only exists in the virtual realm. In case you were living under a rock, Nyan Cat first appeared on the meme scene in 2011, when an ingenious mind merged a Japanese pop song with the animation of a curious cartoon cat flying through space. Nyan Cat is not your run-of-the-mill animated kitten: she has a cherry Pop-Tart for a body, and leaves a rainbow trail behind. Proving that humans are strange, the original Nyan Cat video amassed the fifth most views on YouTube in 2011. 6 years later, Nyan Cat is still going strong, forever traversing through her infinite natural habitat: space. Speaking of space, Nyan Cat: Lost In Space is an interstellar nyanning adventure in which the protagonist is – drum rolls, please! – everyone’s favorite flying feline. Soar through nyannified space environments, battle it out against hilarious foes both terrestrial and extraterrestrial, collect power-ups, avoid power-downs, treat Nyan to mouth-watering popsicles, donuts, and energy drinks, customize the 8-bit kitty icon with a wide variety of skins (such as Spider Nyan and Zombienyan), and enjoy five distinctively different game modes, including one featuring Nyan Cat’s evil counterpart, the tellingly named Tac Nayn.

When you’ll first see the wide-eyed, innocent-looking, chubby kittens referred to as KleptoCats, you will, first things first, start melting from cuteness overload. Then you will probably think to yourself that there’s no way on Earth that these precious little kitties have a mean streak in them and possess the mental fortitude required for committing the despicable crime of stealing. Well, think again, because KleptoCats are cunning kleptomaniacs out to loot the neighborhood – but we’re hundred percent sure you won’t mind, as your room is completely empty. Not for long, though, because these light-pawed felines will soon fill it up with treasures you didn’t see coming… Collect hundreds of thieving KleptoCats, dress them up in literally thousands of ways, and enjoy their adorable looting antics!

Kitty Collector, to put it mildly, is not the most complicated cat game ever created for Android – but we don’t mind at all, and neither do the millions of people who have downloaded Neko Atsume’s brainchild (Brainkitten? Eh, maybe not. Sounds way too zombie-ish). In Kitty Collector, there’s only two things you have to do: amass cat toys and yummy treats in your backyard to attract kitties, then wait for the cats to arrive. More than 40 breeds – including rare, elusive kitties – roam the neighborhood, and each visitor is logged in your treasured Catbook. The one concrete goal in this as-slow-paced-as-it-gets game is to become the grandmaster of Kitty Collectors by – wait for it! – collecting all the kittens.

Kitty Cat Clicker: The Game is a dangerously addictive cat-feeding bonanza in which you have to quench the insatiable hunger of the royally chubby Cat Queen by building an army of feline food-collecting specialists (such as the Milk Delivery Cat, the UFO Cat, the Cookie Cat, and the Police Officer Cat). Once her majesty, the Cat Queen, declares that she’s full, she’ll grant permission to open the treasure chest, allowing you to collect the prizes hidden inside it. Kitty Cat Clicker boasts cute graphics, simple controls, and although it gets a tad monotonous after a while, its overall playability is still through the roof.

Pure 8-bit, Super Mario-infused nostalgia – with cats. In Super Cat Bros, the goal is to reunite Alex with his kitten siblings by overcoming the many obstacles that the mysterious island on which the game is set puts in your way. Six cats with unique abilities are at your disposal, and since each challenge requires a different set of skills, you always have to choose the Super Cat Bro most suited for the mission at hand. More than 50 levels, simple, two-thumb controls, hidden secrets to uncover, adorable characters, and hours of vintage jumping-running-climbing-swimming fun sums up the essence of Super Cat Bros, which will definitely get you hooked even if you weren’t too fond of the legendary Super Mario-series.

Everybody loves to om-nom – especially cats! In this endless cat-feeding arcade game featuring some of the most famous felines in the world such as Grumpy Cat, Nyan Cat, Luna, The Fashion Kitty, and Garfield, you have to feed a pair of kitties all the fish they can take while avoiding gulping down flying bombs, since, believe it or not, swallowing explosives is a fatal mistake even if you are thought to have nine lives. The controls in Nom Cat are simple: just tap and hold to open the mouths of both cats, though make sure that the timing of your tap-and-holds stays impeccable, otherwise – as we have already mentioned – your kitties will go boom-boom and bye-bye.

Cookie Cats is an addictive feline-focused puzzle game in which you have to help a colorful collection of cookie-munching cats to gobble up their favorite sugary delights as they are making their way through the neighborhood. Cookie Cats features six super sweet cookie-connecting game modes, frightening arch-villains such as Drooly Dog, Bobby the Birthday Bear, and Ivy the Carnivorous Plant, and of course loads of lovable cats who will even sing songs for you! With its simple yet multifarious gameplay and colorful visuals, Cookie Cats is a purrfect game for all feline fanatics – especially children.

We know for a fact that nothing can live up to the joy of becoming a slave to a feline overlord being a cat parent, but that doesn’t, under any circumstances, mean that caring after a virtual pet does not bring you any fun. As it pertains to virtual cat pet games for Android, Mimitos Cat, in our opinion, is the best in the business. In Mimitos Cat, the goal is to give Mimitos, your newly adopted kitten everything he needs: playtime, food, a beautiful home, clothes, baths, and plenty of sleep. You can customize the outfit and the home of Mimitos any way you like, grow produce in his garden, and play 8 exciting mini-games to collect coins to buy food, clothes, and furniture. Although we are highly skeptical of virtual pet apps, the varied gameplay provided by the aforementioned mini-games and by more than 200 challenges, the adorable graphics, and the multitudes of customization options have thoroughly convinced us that Mimitos Cat is an exception to the rule and a real gem that’s definitely worth downloading.