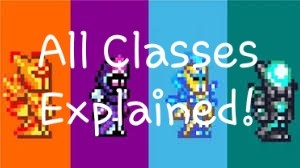 Are confused by the Terraria Classes? And want to know more about them? Then don’t miss out and read this blog to the end!

While playing an action-packed adventure game like Terraria where you have to explore, fight and dig, Having the right knowledge of the gears can make your journey a lot more easier. Some players often get confused with these gears and classes. To help these players,

We have discussed these classes with their equipment and other weapons. By the end of this blog, you will hopefully be able to choose a class for yourself!

So, let’s get to the main part!

For more help on Terraria, read our Terraria Pickaxes, Is Terraria Cross-Platform?

How many groups of Terraria Classes are there?

There are mainly 4 types of Terraria Classes, these are:

Other than these classes, these are different stages of Terraria classes in the game:

Now, let’s discuss the classes one by one!

Ranger class is one of the coolest in the game. You will see weapons that convert arrows into fire and even into bees.

The only draw back of Ranger class is that you it does not work as good as melee in the explosive damages, however it is still very useful!
Now let’s talk about Ranger in detail.

The early stage equipment is boomstick. It is very effective in a short range area and does not work as good in the longer range.

The last stage includes the Nebula Armour that increases damage and mana.

Melee class only fights on a closer range. But in Terarria the Melee class has different weapons like Boomerangs and sprays. Isn’t it amazing?

And other than that, melee class also does not rely on Mana like Ranger does.

These are the early equipment.

After the early game stage, these are the Middle game stage things that will help you in the game.

This Terarria class is the most unique and includes a lot of magic. Players in this class can fight with magic. Using fireballs, light beam and other magic equipment like healing points and magic suit can help you with a lot of damage!

On the early stage you can use mana for different reasons like increasing regeneration of meteor armour and more.

These are the middle game stage equipment.

Nebula Armour is useful in many ways like increasing the strength of your mana and damage.

This blog was about Terraria classes. We have completely covered all of them. Mainly there are 4 classes in Terarria, these are: Melee, Ranged, Mage and Summoner. We have discussed them above, you can read them in detail there!

Lastly, I hope your confusions about the Terraria classes are cleared. Let us know your favourite Terarria class in the comments!