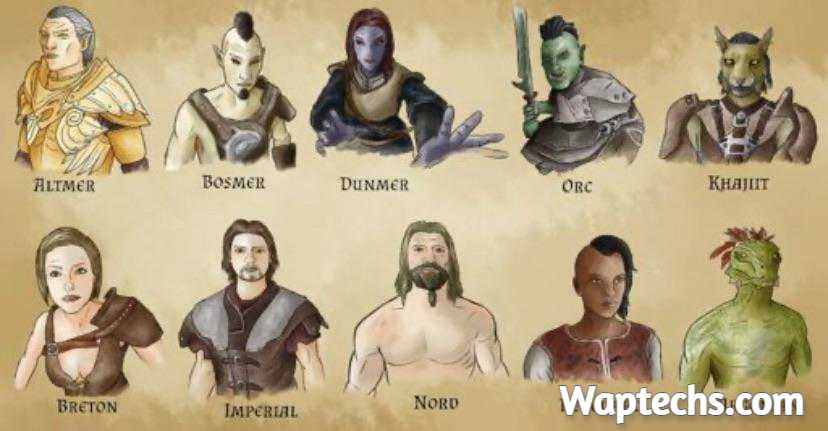 It takes a lot of effort to build a Skyrim character. The first step is to choose a race. Choosing the right Skyrim race can depend on a number of factors, such as appearance, initial skill bonuses, or abilities and powers. Check out this guide to learn more about Skyrim races.

For more help on Skyrim, read our How To Figure Out Why Skyrim Is Crashing, Skyrim RaceMenu Command, Best Skyrim Mods of 2022, Best Skyrim Races As Mages, Skyrim Alchemy Guide

In comparison with earlier Elder Scrolls titles, character creation is very simplified. Despite this, Skyrim still presents players with at least one decisive choice that impacts their skills and innate abilities at the start of the game. This is the race choice. The player has 10 races to choose from. They range from magical High Elf to the powerful and combat-ready Orc.

It is difficult to pigeonhole the player into a certain role based on the choice. Nevertheless, they have an advantage in terms of their play style. Additionally, they are granted a select few traits or abilities that are exclusive to the race they are a member of.

Today, we will discuss which is the best and most beneficial option. Read on to find out every Skyrim race that can be selected.

The 50 percent disease resistance of Argonians is commendable. The game becomes rather pointless, however, if other players decide to be werewolves or vampires. Vampires and werewolves have complete immunity against any disease. Argonians are able to recover health quickly due to their skin power. It is beneficial when the going gets tough. You can use it once daily, though.

Lastly, the ability to breathe in water is a nice touch. Anytime you want to spend some time underwater there are potions available to help. And there are spells too. Argonians might seem convenient at first, but they don’t offer most benefits over the long haul.

Initial thoughts suggest that the Wood Elves would make an excellent stealth archer. They are specifically skilled in this area. Furthermore, they get to temporally charm a different animal once a day in order to fight for them. They also gain protection from illnesses and poisons.

It is easy to handle disease without the added resistance. But the problem of poison is far too common to make resisting it a worthwhile advantage. It is, however, nice having the ability to command an animal. The only way this can actually work is if a great deal of luck is involved. It is also useless in the countless dungeons in which the player is inevitably going to fight.

Altmer is one of Skyrim’s superior races due to their magic bonus of 50+. Their magical bonus affects them continuously. Their magic bonus is also affected by the power of Highborn’s. Due to this, they can regain magic faster than most other characters in Skyrim. They are particularly useful at the beginning of the game. When training a spell, they are also valuable.

The Altmer also has more height, which allows it to run faster. In this regard, it is almost as good as the Breton. This race is better for becoming a mage than the Breton.

It is no surprise that the ever-popular and infamous cat people of Elsweyr come equipped with a set of promising skills. A welcome boost to alchemy is included as well as stealth and archery. Unfortunately, those skills are hard to master. In addition, they have some of the most useless features in the game.

For sixty seconds, Khajiit has a better vision with Night Eye. It has unlimited uses each day. Having trouble seeing in the dark, however, is typically not a problem. Gamma settings are most commonly used to overcome this obstacle. Unarmed damage is also increased. That’s only useful for challenge runs and role-playing.

There are a lot of different starting skills available to the Redguard. However, the majority of them focus on one-handed weapons. They tend to fight with swords and boards. In the end, though, their racial characteristics really pull them together as a formidable force.

In 60 seconds, Adrenaline Rush will increase their stamina regeneration ten times. It allows players to spam power attacks and flurries recklessly, which is always fun. Additionally, they receive a significant boost to their poison resistance, which can never hurt.

In the Elder Scrolls universe, an Imperial is like your average Joe. They’re just ordinary people. Their skills are pretty standard. Nothing about them is noteworthy. This role has been well established for years, and Skyrim’s iteration does not stray far from it.

As a starting skill, they boost their Heavy Armor, a common skill for sword-and-board warriors. The amount of gold they find is boosted by a small bonus. A minute later, humanoid combatants within a mile of them are calmed by their Voice of the Emperor power, enabling a reprieve from battle. Although this is a helpful power, one will eventually forget that it even exists.

When facing mages, the 50 percent frost resistance is invaluable. Using Battle Cry can also save your life if someone is about to shoot you down and kill you.

In Skyrim, the Nord makes for a reasonably good character build. However, it may not be the best. This is to do with Battle Cry only being usable once per day. Other races are more magically resistant.

Among the popular choices in Morrowind are the storied natives. In addition to spellcasting and stealth, they have a wide array of starting skills. However, they are still flexible enough to lean either way or to combine both.

Sparks are the extra spell they get at the beginning. It is a type of lightning similar to Flames. They are a race with the Ancestor’s Wrath power.

It deals eight points of fire damage every second to anything within the melee range for 60 seconds. In addition, they gain a significant fire resistance boost. This is extremely useful when battling lots of dragons in a game.

You can’t go wrong with an orc if you want to get into melee combat. Orcs are known as mighty warriors and celebrated artisanal craftsmen. Their skills reflect this. With their bonus to smithing as well as enchanting, they can perform DIY tasks with ease. They also have bonuses for all melee-related skills, as well.

Despite being painfully limited to one use a day, their power is one of the more valuable ones. They call it Berserker Rage. The effect lasts for sixty seconds and reduces the Orc’s damage. At the same time, they also deal twice as much damage for sixty seconds.

The Bretons are simply magical Imperials. Imperial cousins don’t have the racial abilities they do. Almost all types of spellcasting are available to them as their starting skills.

Conjure Familiar is an extra spell they start with. They can summon a wolf spirit to assist them in combat with the spell. For sixty seconds, they can absorb 50% Magicka, which has its advantages. Most importantly, they become resistant to most kinds of magic. Magic-users can inflict a lot of pain, so this could potentially save lives.

The Altmer essentially serves as the game’s secondary antagonists. However, from all of the other possible selections, picking them as a starting race offers the most benefits. They aren’t much of an asset if you aren’t playing a mage. Even so, if the player has a magical bent, they still impact gameplay the most.

In essence, their Highborn power transforms them for sixty seconds into Magicka batteries. Increasing Magicka’s regeneration and enabling them to fling spells in a frenzied way. They also have a significant Magicka boost, to begin with. It’s like gaining five levels in one go. For a build focused on magic, it has a clear advantage over all other races.

This was all about the Skyrim Races. You should take this to heart that the Breton and Altmer are the best races in Skyrim, while the Khajit is the worst.