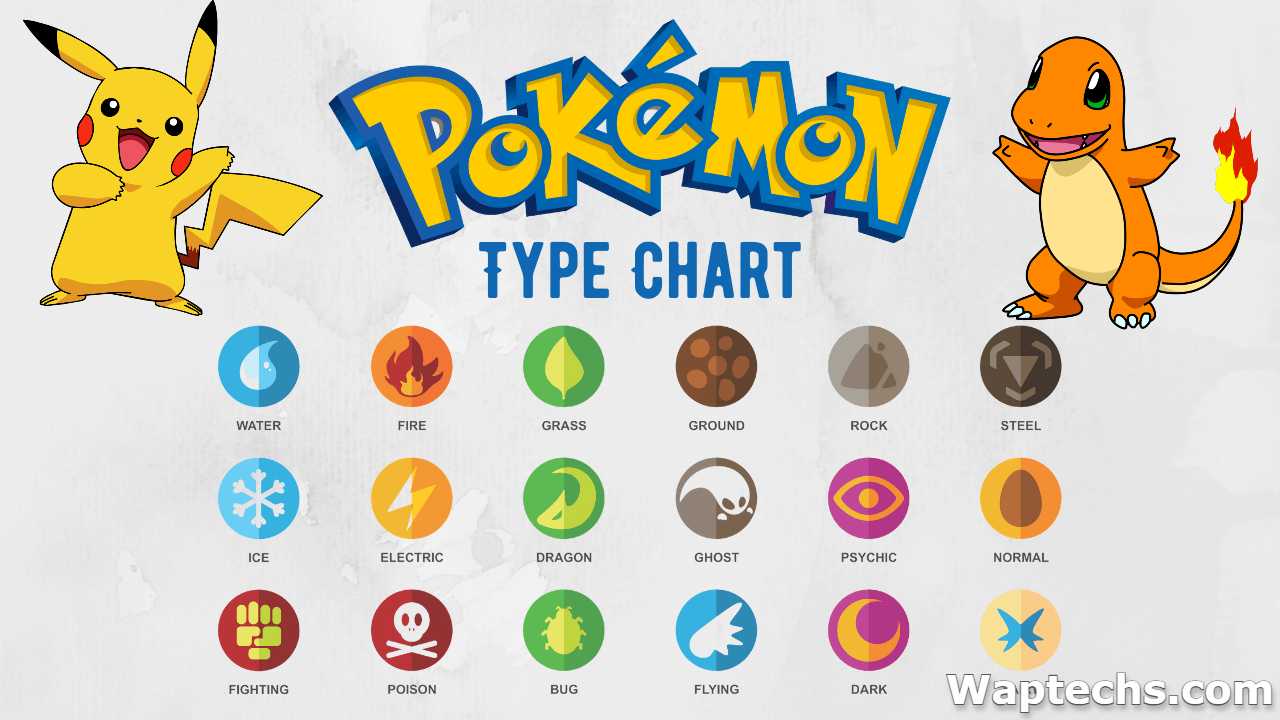 Each Pokémon creature and its move has a type. There are strengths and weaknesses associated with each type, both in terms of attack and defense. It is advisable to use Pokémon and moves which are of a type advantage over your opponent during battle. The damage caused will be much greater than usual.

You will receive twice as much damage if you have a single-type advantage. If you have two different types of advantages, you will be doing quadruple damage. Both instances will display the message that It’s very effective on the screen.

In short, Pokémon types define the strength and weakness of one Pokémon against another. As a result, reducing or eliminating further damage. Consequently, you will also receive additional damage or reduced damage.

Long-term Pokémon fans will be familiar with the standard Type chart derived from different generations. Nevertheless, newcomers may find it overwhelming and be unsure where to start. Therefore, we have created our own Pokemon Weakness Chart. You can learn more about Type Effectiveness below.

In some Pokémon, strengths and weaknesses are canceled out so that the Pokémon only takes normal damage. Rayquaza is twice as vulnerable to ice-type moves. Shuckle is vulnerable to fire-type attacks because the rock-type fends off fire moves well.

The strengths and weaknesses of each individual aren’t necessarily opposite of each other either. It is true that fire-type moves do less damage to Pokémon of the water type. And fire-type Pokémon take double damage from water-type moves.

Obviously, this doesn’t apply to all types. Fighting moves, for instance, are very effective against normal moves. Rather than doing reduced damage to fighting types, normal types simply do regular damage to them.

Raids and battles require an understanding of Pokémon’s strengths and weaknesses. Make sure your Pokémon’s moves can do as much damage as possible when it competes with what it’s up against.

How do types work?

There are many Pokémon types that are inspired by real-life elements. In most cases, they work as expected. The moves of the Water-type, for example, are extremely effective against the Fire-type of Pokémon.

A Pokémon can be of two types, as in the case of Rock and Ground-type Geodude. Due to their weakness to Water-types, Geodude would be quadrupled in damage by a Water-type move. Also, Pokémon are usually resistant to the type of Pokémon they belong to. Some exceptions do exist, however.

Difference between Pokémon Go type effectiveness and other Pokémon games

Unlike the main series, Pokémon Go also does not have immunities for the type of Pokemon. There’s more to it than that. The following immunities have been removed:

Initially, they functioned the same as simple resistances rather than total immunity to damage. The new formula, however, gives them a second layer of resistance.

The normally immune Pokémon only takes 0.39 times as much damage as it normally would. To put it another way, type immunity reduces damage received roughly by a third.

As a result of the latest changes, Type effectiveness is much closer to the multiplier in mainline games. Nevertheless, they aren’t fully in agreement with them. However, this does accentuate the importance of Type effectiveness even further. Therefore, it would be worth getting to know those matchups if possible.

This was all about the Pokemon Weakness Chart. Type charts have remained largely unchanged over the years. However, a few things have changed. The Steel and Dark types were added in Generation 2. There was an addition of the Fairy type in Generation 6.