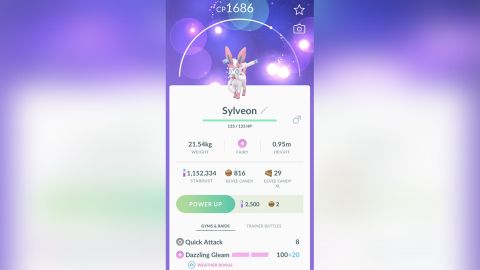 You can evolve each form of Eevee in Pokémon GO through this guide. The evolution process of Eevee is necessary in Pokémon Go in order to get one of many Eevee evolutions. Various methods, such as using specific names, can be used to get the correct Eeveelution.

The evolution process for Eevee in Pokémon GO is similar to the anime and main series games. As a blending of the names of Pokémon and evolution, it’s often referred to as Eevolution.

To accomplish the trick, Eevee must be given a unique nickname before evolving. You can find all the names of Eevee’s evolutions in this guide. We will also go into detail about how to evolve Eevee into the form of your choosing.

What’s known as the nickname trick is the simplest and fastest method to evolve Eevee. The Eevee nickname method allows trainers to guarantee each evolution for Eevee once each.

A trainer will be able to choose the Eeveelution they want simply by nicknaming their Eevee. You can use 25 Eevee candies to evolve to the evolution that has the corresponding nickname for your Eevee.

Using the name trick is limited to one use per evolution. To avoid making a mistake, you should thoroughly plan before you act. All Evolutions are affected by this.

Get Vaporeon, Jolteon, and Flareon in Pokemon Go

Pokémon Go provides relatively easy access to Vaporeon, Jolteon, and Flareon, the first Eeveelutions. Trainers simply have to feed about 25 Eevee candy to them in order to evolve them.

When you use the nickname trick, you cannot be certain which of the three Eevees you’ll get. You’ll have to take your chances. Nevertheless, trainers have many chances to acquire them all, considering how little candy is required.

Get Espeon and Umbreon In Pokemon Go

Using the Eevee name trick, Espeon and Umbreon can be evolved. The Buddy Pokémon method can also be used for them.

Follow these steps with your Eevee Buddy to get Espeon or Umbreon:

A GPS signal is also required to determine the day and night otherwise the evolution will be random without it.

Both Espeon and Umbreon have never spawned in the wild since they require special items to evolve. Buddy System is the only reliable method of receiving them since it can be repeated.

Get Leafeon and Glaceon in Pokemon Go

Two in-game items are necessary to obtain Leafeon and Glaceon. During the evolution process, trainers who have Eevees equipped with the Mossy Lure will receive Leafeons.

PokeStops with Glacial Lures will allow trainers to evolve Glaceon. Each item costs 200 coins in the game store. Unlike regular lures, these lures are specific to certain kinds of Pokemon.

Get Sylveon in Pokemon Go

Eeveelutions’ latest addition is Sylveon. The process to obtain it is somewhat difficult, but completely worth it.

The friendship meter is the key to getting Sylveon in Pokemon Go. A trainer must have Eevee as a buddy and have 70 hearts earned with it.

Again, this is going to take some time. Trainers will eventually reach the mark as long as they maximize the number of hearts they earn daily.

Eevee’s in-game information screen will show the silhouette of Sylveon when Trainers received the right amount of hearts.

Does Evolve have an alternative to the Name Trick?

The evolution of Jolteon, Flareon, and Vaporeon from Eevee is random. Alternative methods, however, are available for Umbreon, Espeon, Glaceon, and Leafeon.

When you walk with an Eevee as a buddy Pokémon for ten kilometers, both Umbreon and Espeon evolve. If that’s done, then the buddy Eevee will evolve into Umbreon during the day, and Espeon during the night.

This trick won’t work if your Eevee is not a buddy Pokémon when it evolves.

In relation to Leafeon and Glaceon, Mossy Lures and Glacial Lures can both be adapted to evolve reliably. You will evolve the next Eevee into its leaf or ice form after spinning a Pokéstop with a Lure Module active.

The lure module needs to be in range for you to use it. Once you spin one of these lured Pokéstops, the evolution icon of your chosen Eevee will change.

As soon as you set Sylveon as your buddy Pokémon and earn 70 hearts, it will evolve. Poffins can speed up this process, but still, it will take several days.

This was all about Eevee evolutions nicknames and how to evolve Eevee in Pokemon GO.