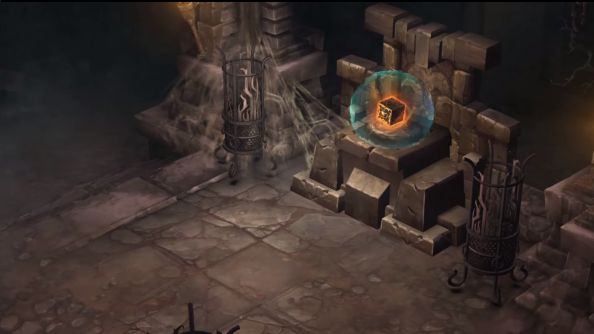 Diablo 3’s most important item is Kanai’s Cube. This heir to Horadric’s legendary cube offers a wide list of services that expand your character just as important as crafting and Paragon grinding.

In this guide, we discuss some lesser-known Diablo 3 Kanai Cube properties, as well as the numerous things you can do with it.

How to Get Kanai’s Cube in Diablo 3?

The Kanai’s Cube holds considerable importance within the game. Getting this is still a common goal for many Diablo 3 fans when playing the game, primarily for the reason of transmuting items.

The Kanai’s Cube can be obtained quite easily in Diablo 3. All players need to do is access Adventure Mode and complete a quest for Zoltun Kulle. And Kanai’s Cube should be within your reach very soon. Kanai’s Cube is located specifically in The Ruins of Sescheron.

In the Immortal Throne with Kanai seated upon it, the Cube is usually found to the right of the Elder Sanctum map. You can claim it as soon as you find it by clicking on the cube.

However, a thorough exploration of the Ruins takes a long time. But once that’s done, you’ll be able to use Kanai’s Cube like crazy.

In every adventures mode zone, you will find the Cube in your hub town next to Kulle once you claim it. This will allow you to use the powers of the Cube. Since its introduction, the cube hasn’t changed much in terms of its powers and abilities.

A new twist is introduced to the Cube in Season 20. Rather than being limited to one of each type, you can choose any three effects in the cube.

You won’t be able to play Adventure Mode until you have beaten any difficulty of the main campaign. So it can’t be used right away.

It is still quite beneficial to have Kanai’s Cube in Diablo 3. Although Adventure Mode is easy to get, it’s where players will enjoy the most post-game content.

Additionally, the players need to remember that Kanai’s Cube needs to be found once every season. In other words, you’ll need to search for it again in Season 24 even if you got it in Season 23.

Diablo 3 has several more important features than you would expect. As exciting as the loot is, don’t forget about Kanai’s Cube as well.

What is Diablo 3 Kanai Cube?

Kanai Cube is a prototype of the ancient Horadic Cube and the most powerful model. The ancient mage order approved this version as created and designed by Zoltan Kulle.

Multitudes of Horadrim began to lose their sanity after Kulle used magical methods. His methods for creating the Cube may have even affected his sanity.

Horadrim turned against using the Cube as a result. Keeping the initial creation weak and safe, Horadric Cubes were created.

In this way, you can understand how you came across it. After reaching level 70, you’ll be able to access Adventure Mode. In Act 2 you killed Kulle for the second time. It’s surprisingly alright with his spirit to see you now.

In Zoltan Kulle’s world, death seems to be at best an inconvenience. You are indeed welcome to take advantage of Kulle’s offer. His ancient Cube was hidden somewhere by the Horadrim. It’s like very powerful energy that you can harness for your own ends if you go and find it for him.

A sort of clue is known by Kulle about the Cube’s fate. It was given to a secrecy order of Barbarians by the Horadrim when they took it from him. According to that logic, they successfully kept the Worldstone safe for generations, thus asserting that they were experts at keeping things safe.

Kanai possessed the Cube before Sescheron fell. He occupied the Immortal Throne for generations and ruled all of the Children of Bul-Kathos as the most worthy of all the barbarian figures.

Bul-Kathos and Wogar were the only ones who had been chosen before him. However, Kanai passed away before any such decision could be taken. It was the Lord of Destruction, Baal, that came to Sescheron.

The spirit of Kanai was trapped after he died fighting the armies of Baal. Until someone who is honorable and powerful enough was able to reclaim his remains, he was unable to pass away. In this case, it must be you who’ve reached this point.

By reforging a legendary item, you are resetting all the stats on that item. Also allowing it to roll as either a legendary Ancient or a legendary Primal.

The only way to enhance a specific is to use this recipe. You should also be aware of this if you place ancient or primordial items in this recipe. Reforging it into a standard legendary is not guaranteed to produce the same results.

Upon reforging, any augments attached to the item will also disappear.

Here is what you’ll need:

Early Seasonal play on this recipe makes it one of the most powerful in the game. This is so that rare items can be upgraded into legendaries of the same slot as they were original.

A Primal or Ancient item can be created. In fact, it can be a very effective way to obtain Primal weapons for some classes.

Demon Hunters, for instance, can only choose from two different dagger upgrades.

Primal Karlie’s can also be obtained much easier this way than by farming bounties and reforging an existing one for Shadow’s Impale builds.

There are a few exceptions to the rule. In general, items that are not ancients will always be given priority.

The stats on your well-rolled item do not increase with higher quality if it has all your BiS stats.

Depending on your other pieces, it may be a good idea to keep a very well-rolled non-Ancient until they improve.

There are too many or too few stats available in that piece of gear. An example is the Obsidian Ring of the Zodiac, which is a fixed set of four rolls.

If you reforged this ring, your build would barely be improved. It will most likely be pointless and a waste of material for the most part.

Determine which items are most important to you by using the following priority system.

With a 200% affix, a Non-Ancient Recurve will deal more damage compared to a 150% affix Ancient one.

In this recipe, you can change the type of gems. Therefore, if you do not need Topaz gems, you can turn them all into Rubies.

If you do this in a new season, you can get max-tier gems quickly without using gems that you do not need.

This can be done by visiting Squirt the Peddler in Act 2’s Hidden Camp. Then purchase the essences that she offers for the gem type you desire.

If you wanted Diamonds instead of Ruby gems, for example. This recipe requires 9 Rubies and 1 Essence of Diamond.

At the very beginning of the game, converting set items can be useful. Especially before sets are completed, you are more likely to receive duplicate items within a season.

Using this recipe, you can use your worse-rolled duplicate and transform it into another piece of the set. Either to complete or improve your set of choices.

Remember:- that there is no way to make Ancient or Primal rolls using this recipe. A 2-piece set cannot also be made with it.