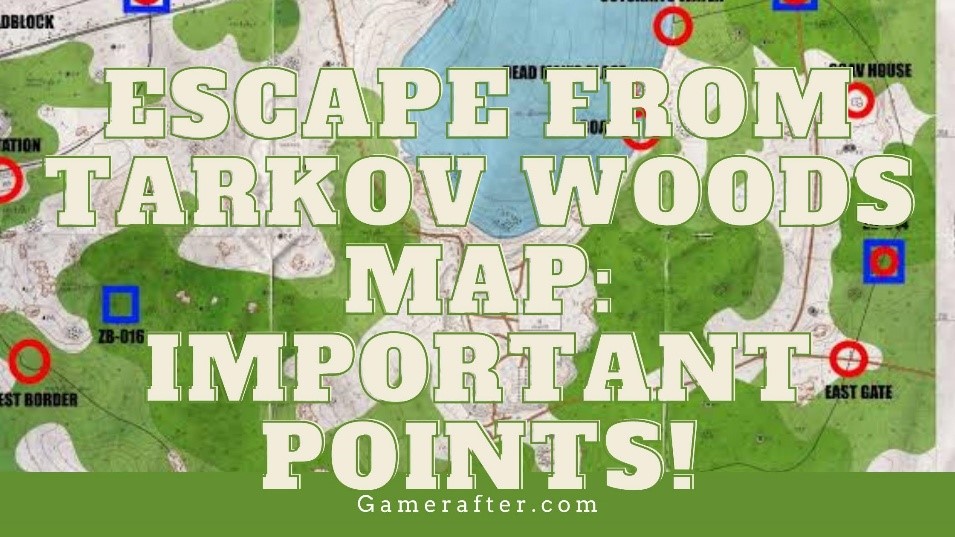 Escape from Tarkov is a multiplayer fighting game. The games have beautiful map with many hills, fields and camps. But it is near impossible for a newbie to survive the woods map without having the knowledge of the map.

In this blog, you will be discussing the important points on Escape from Tarkov Woods map, that will help you to win. We are going to thoroughly discuss them. There are total 12 important points that you should know about.

So, stick to the end and let’s move to the Important Woods map points!

Before we jump on to the important points on the Escape from Tarkov Woods map, these are some important tips that we want to share with you!

These are the 12 important points on the woods map that you should know about:

The Bunker named ZB-016 is an important point on the woods map, because it is visited by many players. It is an intense-fighting area.
It is a small bunker, you can hide in there but make sure that no one is around. It is marked 1 on the map. It is located in the northwest of the forest.

If you really want to start a fight, then Bunker ZB-016 is the place to go!

The next place is the Bunker ZB-014. It is located in the northeast of the Ritual and It is marked as 2 on the map. It is often used for mining and you can also hide there to take down enemies. It is not crowded as the Bunker ZB-016, but you can get some enemies there.

The lookout rock is especially for snipers. It gives you a clear view of the area and you can easily take down enemies. It is located very close to the centre of the map.

The next point on Escape from Tarkov is RUAF RoadBlock. It is an abandoned place. It was previously occupied by the Russian military but they abandoned it. It is located on the north-west of the forest.

This place is also super beneficial for players to take down enemies. It is located near the centre of the map. You can easily hide in the forest and kill enemies, but be careful because you might not be the only one there!

Lumberyard is in the heart of the Escape from Tarkov map. It is marked as 7 on the map. It is an industrialized area. You will see mills, storage facilities and shacks in lumberyard. It is also one of the most visited place by the players.

Sniper rock is another amazing place in the Escape from Tarkov. It is located on the south of the lumberyard. The Sniper Rock is marked 8 on the map. It also gives you a beautiful view of the surroundings.

Ritual is important point of Escape from Tarkov. It is a sacred place where different sacred ceremonies are conducted. If you enter from the eastern side of the town, It is located south to the lumberyard and between the control points. Ritual is the favourite place for many players, so you should be careful there.

Plane crash site is also an important area. It is located near the west bunker. It is a nice place to hide, however you will have to wait there sometime to get some players down.

Box rock is also situated near the west bunker. It is a very useful place to hide and kill enemies. Many players go to the Box Rock to hide. You have to be careful while hiding in the Box Rock.

Dead Man’s Place is an important place because it is situated on the shore of the map. It is not as crowded but it is one of the best places.

The last place on our list is the sneaky duffle. It is located near the Ritual. It is a nice place to hide. You have to play carefully here, because you will see many players near sneaky duffle.

These are some frequently asked questions about Escape from Tarkov that we will try to answer.

Is Escape From Tarkov free?

No, Escape from Tarkov is not free. You have to buy the game from the official website in order to play it.

What are the least system requirements for Escape from Tarkov?

In this blog, we have discussed the Escape from Tarkov Woods map. We have mentioned all of the important points in the map, you can know about them above.

I hope this blog was helpful for you. If you have any queries, you can share them below!