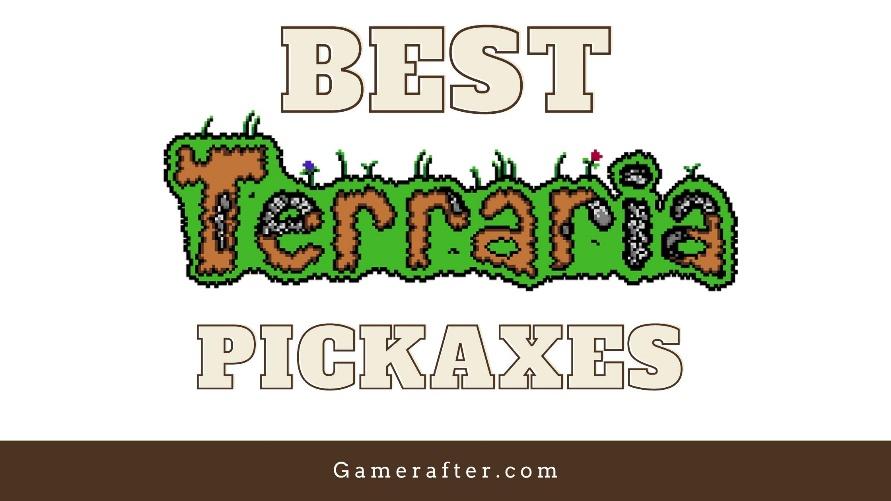 Do you want to know about the Best Terraria Pickaxes? Then read this blog to the end, because we have discussed all of them with Ranking!

Along with other useful tools like swords, pickaxes also play a major role in Terraria. Using the best pickaxe in Terraria can make your journey easy. These pickaxes are able to remove blocks and are used for mining purposes.

There are certain levels to which some pickaxes can work, like some pickaxes won’t work on the hard blocks and you will need a stronger pickaxe for that. Keeping in mind this point, we have made a list of the best pickaxes at different levels.

For more help on Terraria, read our Terraria Classes, Is Terraria Cross-Platform?

These are the best pickaxes in the beginner category:

Platinum pickaxe is one of the best pickaxes in the beginner section. It works faster than any other beginner pickaxe.

You can use Platinum Pickaxe to mine Demonite and Crimtane Ores. One of the best things about the platinum pickaxe is that it is lightweight and easy to carry.
These are the stats of the Platinum Terraria Pickaxe:

The next pickaxe is the Nightmare Pickaxe. It is one of the best beginner pickaxes. It can mine Crimstone, Hellstone, Ebonstone and Obsidian. It can also mine Dungeon Brick at 0 depth.
These are the abilities of the Nightmare pickaxe:

The best beginner Terraria pickaxes list is incomplete without the Reaver Shark. It is able to mine Cobalt and Palladium Ore. It is one of the best pre-Hardmode pickaxes in Terraria.

These are the abilities of Reaver Shark:

Following are the best pickaxes in the intermediate category:

Palladium Pickaxe is considered one of the best mid-range pickaxes in Terraria. It helps you mine faster and it can mine any block except for Adamantite Ore, Titanium Ore and Lihzhrd Bricks.

It is a very powerful intermediate pickaxe, these are the abilities of the Palladium Pickaxe:

There are 4 hard-mode Luminite pickaxes, these are Nebula Pickaxe, Solar Flare Pickaxe, Stardust Pickaxe and lastly the Vortex Pickaxe. These four pickaxes share the same stats and are very powerful in the game. The abilities of the Luminite pickaxe are

It is a Hardmode Pickaxe, but has a lower mining speed as compared to the other pickaxes in this section.

It has other benefits that’s why it is on the best Terraria pickaxes list. It is able to mine any block in the game except for Chlorophyte Ore, Lihzhrd Bricks. The abilities of the Titanium pickaxe are:

These are the best Terraria pickaxes in the strongest category:

Nebula Pickaxe is one of the 4 Luminite pickaxes. It is very powerful and fast. It can mine Hardmode blocks with great ease. Like the other Luminite pickaxes, it has the pickaxe power of 225%. As mentioned before, it is very fast and has the mining speed of 12. The Damage is 80.

Picksaw is one of the strongest pickaxes in Terraria. You can only get it once you defeat the golem. Picksaw can mine any block and it can cut down trees. These are the stats of the Picksaw:

Here are some of the frequently asked questions about pickaxes in Terraria.

The Shroomite Digging Claw is the best mining tool in Terraria. It is a pickaxe and has the ability to mine anything. The only thing that it can not mine is the Lihzhrd Bricks, other than that it is capable of mining anything!

How many hellstone bars do I need to create the molten pickaxe?

To create a molten pickaxe in Terraria, you need to have 20 hellstone bars.

How do I get the best pickaxe in Terraria?

If you are a beginner, then the easiest way to find pickaxes is by fishing in the ocean. Some pickaxes are easy to find, but most of the best pickaxes in Terraria require a lot of fishing power.

I hope you liked this blog, Let us know which Terraria pickaxe is your favourite!